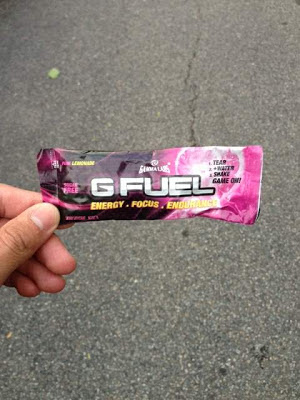 The other day when I was at 7/11 picking up a bottle of water they had these little packets on display on the door; they were only around like 75 cents a packet so why not try it out. I didn't know anything about the brand or the company and I wasn't even 100% sure what this was exactly until I read the back. It's pretty much a light pre workout or energy drink you can take before "playing" it says on the back. There isn't a huge and crazy ingredients list, just some vitamins, and a few other interesting things; there is 150mg of caffeine which actually isn't too crazy at all for most people, and there also is a really cool antioxidant complex that they threw into the mix as well.

I used it the other afternoon before the gym, just threw it in a bottle of water and it mixed very easily. I was never one to care about the taste of supplements, whether bad or good, it was just never a big deal to me, but I do know a lot of you out there do care so I will add that it tasted pretty crappy. Like putrid lemonade that had been sitting in the sun for a few days bad; it actually had my face cringing a little bit like I was eating some sour candy.

I really wasn't expecting much, but I'm surprised to say that this stuff wasn't too bad! I felt good shortly after taking it, and had a great workout; to me personally it felt like it was effecting my mood in a positive way rather than my strength or stamina for instance which is perfectly fine for me. I just felt in the zone I guess would be the best way to put it, like I was actually bumping my head every now and then when a good song on my ipod would come on.  Just keep one thing in mind though, I don't normally take pre-workout supps at all so my tolerance to them is very low; if you do normally drink them than you might not get crap out of this stuff; some of you may not even consider this a pre-workout at all! As I said before look at the ingredient profile, it's very light.

So if you don't like taking hard core pre-workouts for whatever reason, they get you too wired, edgy, you don't feel well, then I do recommend that you try this stuff as it's not as harsh!

Posted by Jordan Cromeens at 4:57 PM