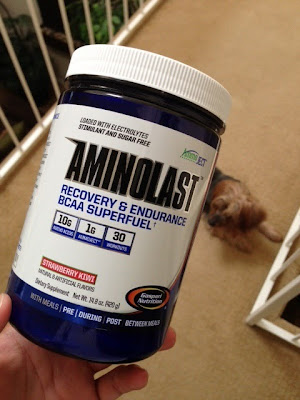 I originally bought AMINOLAST, Recovery & Endurance BCAA Superfuel because I wanted a tasty amino drink to sip on without all the caffeine. Some of you may have read my review on Optimum Nutrition's Amino Energy, which I love, but the only thing is it has caffeine in it. So sometimes when I'd workout at night and have that to drink I wouldn't be able to sleep. For whatever reason it may be sometime you just don't want caffeine and that's where Aminolast comes in!

It is your typical Amino drink that you can have before, during, and after your workouts as well as in between meals. Each serving has 10g of amino acids, electrolytes to aide further in recovery, and 1g of AMINOJECTtm, which is supposed to help diminish the negative effects of Ammonia buildup which slow you down while working out. 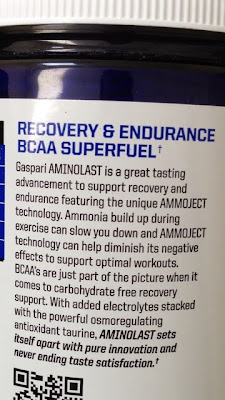 It does taste very sweet, even though there is no sugar in it, so I mix in a big (1 liter) bottle of water. It doesn't break down or mix very easily 100%, you do have to have to shake the crap out of the bottle to break it down fully. I have tried stirring it in a glass and it tends to clump a little on the top of the glass, not that big of deal though. As for the price it's a little pricey just for it being just an amino drink, I got it for 34 dollars. Each canister has 30 servings, so you're paying a little over a dollar for each serving.

I got the strawberry kiwi flavor, and again it was pretty tasty and refreshing especially if mixed with cold water. Again though a very popular trend these days is using artificial sweeteners and even though this stuff has no sugar it does taste very sweet. Which makes me worried about all of the fake sugar I'm getting in everyday and any possible side effects....

If you're already taking amino's, or bcaa's, I'd definitely recommend that you give Aminolast a try! 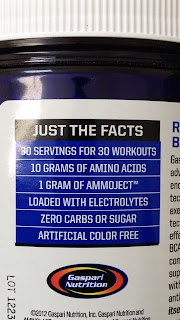 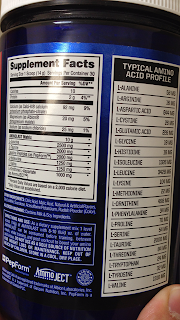 Posted by Jordan Cromeens at 10:31 AM