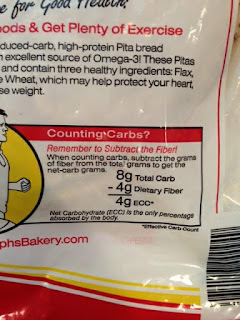 This seems to be a new thing I'm noticing these days with healthy foods, you'll see a lot of packaging on foods that says something along the lines of "Only 5 net carbs"... Well what is a net carb exactly and how does it help you? A net carb is when you take the total number of carbohydrates in serving of food and subtract the amount of fiber from it; what you're left with is a net carb. For example if I was eating some whole grain tortillas and on the nutrition label it said 10 grams of carbohydrate and 5 grams of fiber for one tortilla then technically you're left with 5 net carbs. This is because your body can only absorb 5 grams of carbs due to the amount of fiber.

So why is this a good thing to know? Because today lower carb diets seem to be the way to go for those looking to lose the pounds and fast, and by knowing how to calculate net carbs you'll save yourself a lot of trouble and actually be able to eat more then someone else who was counting carbs but didn't know how to calculate net carbs. Another example of this is lets say 2 people were only allowed to have 40g of carbs per day while dieting. The first person knows how to calculate net carbs eats a total of 70g of carbs, but all from sources with a lot of fiber which added up to 30g of fiber... leaving them at 40g of net carbs taken in for the day! Now lets say the second person didn't know about net carbs and just eats 40g of carbs, but in actuality they ate 20g of net carbs then they technically could be allowed to have more!

Whether you have some extreme weight to lose, or you're simply trying to tone up while retaining muscle mass, keeping net carbs in mind can help you out a lot when choosing the right foods!

Posted by Jordan Cromeens at 11:45 AM